Patent Agents Exam – To Be or Not To Be !

Law applies equally to all – including Lawyers. Indeed it should ! If in the process it leads to uncertainties – well, that is collateral damage for the ” greater good” . Patent Agent Exam is one such conundrum !

People in India need to clear a Patent Agent Exam to register as a Patent Agent who only is authorized to “practice before the Controller of Patents” .

Below is a summary of how this contentious matter has proceeded till date. Your comments and updates are welcome !

In March 2013, vide its order in W.P.No.8472 of 2006 filed ( in which petitioner is Mr. SP.Chockalingam) the Hon’ble High Court of Judicature at Madras Court ruled on the following :

Writ Petition filed under Article 226 of the Constitution of India,  seeking for issuance of a Writ of Declaration, declaring that the amendment introduced to Section 126 of the Patents Act, 1970, by Section 67 (a) of the Patents (Amendment) Act, 2005 (Act 15 of 2005)  as illegal, unconstitutional, ultra vires and void.

and the ruling was :

…..53. In the result, this writ petition is allowed, declaring that the impugned amendment introduced to Section 126 of the Patents Act 1970, by Section 67 (a) of the Patents (Amendment) Act, 2005 (Act 15 of 2005) as illegal, unconstitutional, ultra vires, void and unenforceable. No order as to costs.

Originally, the Section laying down qualifications for a Patent Agent read :

(c) he has obtained a degree from any University in the territory of India or possesses such other equivalent qualifications as the Central Government may specify in this behalf, and, in addition,-

So, as originally drafted, any lawyer (LLB) with any additional degree could become a Patent Agent. A non-lawyer graduate had to pass a qualifying examination ( Patent Agent Examination ) for the purpose.

The 2002 amendment to the Act replaced “degree from any university” with “degree in science, engineering or technology”.

So, now, an LLB with a degree in science, engineering and technology still did not need to pass the exam, while anyone else needed to, besides having at least one of the degrees prescribed.

In 2005, a deletion was made. Section 126 (1) (c) (i) that entitled advocates enrolled under the Advocates Act to register themselves as a Patent Agent without fulfilling the formality of passing the Examination, was taken away. So, with this amendment, the Exam was necessary for anyone aspiring to become a Patent Agent ( whether an LLB or not) , in addition to a degree in science, engineering or technology

Further, per  Section 127 of the Act,  (ONLY) a patent agent is entitled (1) to practice before the Controller of Patents and (2) to prepare all documents, transact all business  and discharge such other functions as may be prescribed in connection with any proceeding before the Controller under the Act.

Subsequently, a writ petition 8472 was filed by SP. Chockalingam in 2006 before the Madras HC against the Controller of Patents and the Union of India praying for the issuance of a writ declaring the said amendment under Section 67(a) of the Patents (Amendment) Act unconstitutional.

The Petitioner, an advocate himself, contended that not only did the 2005 amendment violate his Fundamental Rights as under Section 14, 19(1)(g) and 21 of the Constitution, but also curtailed an advocate’s right to practice before all courts, tribunals and quasi-judicial authorities as granted under Section 30 of the Advocates Act. The petitioner also contended that the duties of a Patent Agent as laid down under Section 127 of the Act comprised only a part of the work performed by an advocates, and by permitting only graduates in science, engineering or technology that have passed the qualifying examination to practice as a patent agent, the law introduced a greatly unjust bias.

The Court, in its March 2013 decision, declared the 2005 amendment to Section 126(1)(a) as illegal, unconstitutional, ultra vires, void and unenforceable. Since the 2002 amendment mandating a technical degree was not challenged by the petitioner, those with non-science degrees still could not practice as a Patent agent, per this judgement.  In short, the Madras High Court restored status quo regarding the patent agent qualification under the Indian Patent Act, 1970 as was in existence before the Patents (Amendment) Act of 2005

So, with the March 2013 decision , advocates with a science, technology or engineering degree were automatically permitted to practice as patent agents – exempting them from the requirement to pass the patent agent examination, while advocates with non-science degrees remained disqualified from even  sitting for the examination.

HOWEVER, the decision was appealed by the Controller of Patents after some delay as elaborated hereunder. (vide Writ Appeal No. 532 of 2014 )

Presently, there seems to be NO movement on this appeal. Whether this stays the order as above is also not clear, although the Indian Patent Office seems to think so.

Some interesting observations from the Judgement in the Writ Petition :

38. Prior to the amendment, the second category of persons eligible to register their names as patent agents were degree holders in Science, Engineering or Technology, who passed the examination conducted by the respondents in Patents Act, including the Rules framed thereunder and drafting. It cannot be disputed that only the degree holders, either B.L., or LL.B., of any recognised university approved by the Bar Council are eligible to enroll as advocates. In imparting education and conducting examinations, especially in law and drafting, the recognised universities are more competent than the respondents, who are conducting only departmental examination in Patents Act and drafting and therefore, advocates, being law graduates of any recognised university, approved by Bar Council are certainly better qualified persons in legal acumen, drafting and interpreting the law than the other category of persons, who were also permitted to register as patent agents. Prior to the impugned amendment, it was a matter of right to any advocate to register as patent agent, since the work of a patent agent is only a part of the work done by any advocate. However, by the impugned amendment, the term “Advocate, within the meaning of Advocates Act, 1961” has been unreasonably deleted by the respondents, without any justifiable reason. Therefore, preventing advocates, better qualified persons and retaining less qualified persons as patent agents, on the basis of the examination conducted by the respondents would not be justified under the pretext of reasonable classification, hence, the impugned amendment is violative of Article 14 of the Constitution, as it is an unreasonable class-legislation.

47. It cannot be disputed that in respect of legal practice, the competent supervising machinery or authority is only the Bar Council and as per Section 30 of Advocates Act, an advocate is entitled to appear before any Court, including the Supreme Court, Tribunals and other authorities, such right of an advocate cannot be tampered with by the respondents, in the name of patent agent. Advocates, being law graduates doing part of their work in respect of drafting, preparing documents, filing and appearing before the authorities, apart from arguing cases before Courts are comparatively better qualified persons than the other category of patent agents. Hence, by way of the impugned amendment, the respondents cannot delete the term Advocate and make restrictions to the advocates to register their name as patent agents. There is no acceptable reason assigned by the respondents for deleting the word, Advocate, within the meaning of Advocates Act, 1961″ by way of the impugned amendment. The impugned amendment is not based on any reasonable restriction but only an unreasonable restriction, contravenes Article 19 (1) (g) of the Constitution, hence, in the light of various decisions rendered by the Hon’ble Supreme Court, it has to be held that the impugned amendment is violative of Article 19 (1) (g) of the Constitution.

You can find the full judgement via :

This reference was found in a letter available on the Net written purportedly by Advocate T R Mohan , which states, among others :
1.Reference is made to your letter No.CG/RTI/2015/266 dated 23.10.2015 disposing my RTI application DOIPP/R/2015/60420 dated 03.10.15 where in it is brought to my notice that my application for registration as a Patent Agent would be considered in due course of time only after the Writ appeal WA.532/2014 filed against Judgment passed in the W.P. 8472 of 2006 in the matter of S.P.Chockalingam vs. Controller of Patents & Ors. by Hon’ble High Court of Madras is disposed off and based on its outcome

As of now, the letter is available here :

Have any comments / updates ? Please DO provide them in the the comments section, thanks !

Finally, here is an interesting analysis of the December 2016 exam : 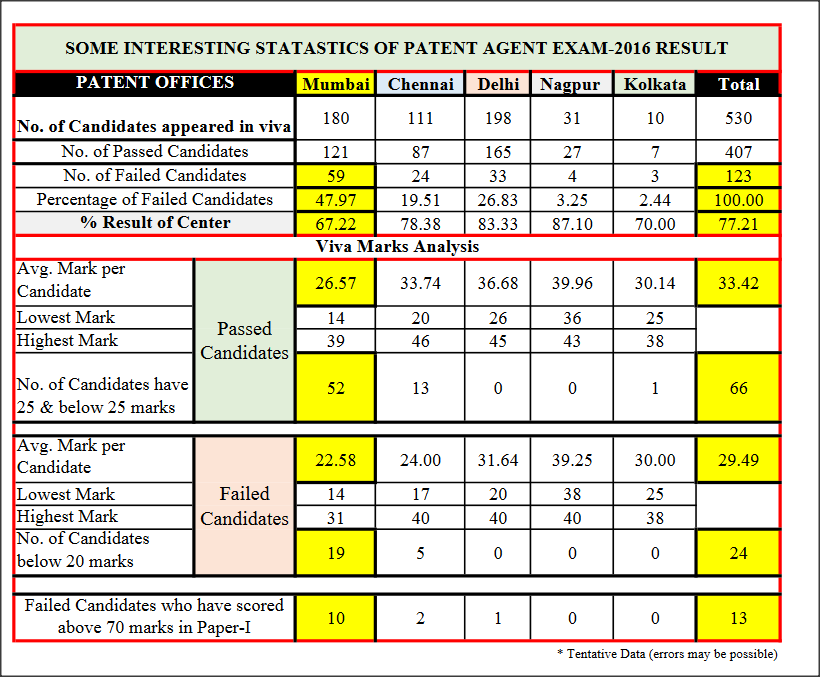 « Twitter getting ready to look in your window ?
Patent Drafting – not to be taken lightly ! »